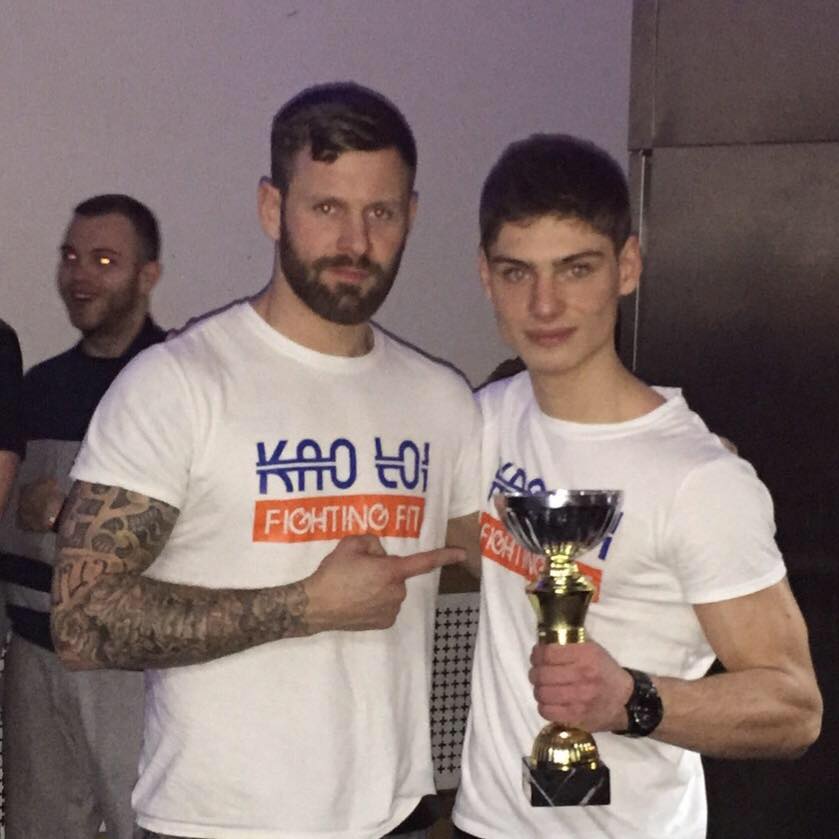 Harry, Oskar, and Kris all in action over the last couple of months.  Oskar at the start of his career, Harry forging a new path in MMA, and Kris saying farewell to competition at the highest level.  Here is a link to the French Television coverage of the event featuring Kris and Oskar

Here are the articles from the Harrogate Advertiser :

Harrogate’s Harry Ettridge competed in his second MMA fight in Stanley, County Durham last weekend. The show was organised by UFC veteran Ian Freeman and he was very much looking forward to seeing the match between Ettridge and Ben Fahey from Scarborough. Freeman said, “Both fighters like to strike and it should be a really exciting fight”

The fight was held at Stanley Civic Hall in front of 500 fans, and by the time Ettridge entered the cage they had already been treated more than 11 bouts. Ettridge began cautiously and looked to find his rhythm, however he soon relaxed and landed some excellent kicks and punches.  His confidence increasing he let an excellent punch combination followed by a knee which landed perfectly.  This changed the momentum of the fight and he continued to attack with ferocity. Seeing an opportunity he locked onto Fahey and took him down finishing the fight with a front choke.

Ettridge and Craig Skelton, both members of the Kao Loi Gym on Skipton Road, are both in action again on May 20th. Head Coach Pierre Mahon said, “Well done to Harry who put in an excellent performance. The next MMA show is in Halifax and we are really looking forward to taking a big contingent of support over to watch the guys.”

Kristoffer Addis and Oskar Stachura who train at the Kao Loi Gym on Skipton Road, fought in Clermont Ferrand in the Perfect Muay Thai show run by trainer and promoter Marcel Do Nascimento.

It was to be Stachura’s first international fight since joining Kao Loi Gym two years ago, while for Addis it was the final fight in a terrific career spanning 10 years. His final challenge was against World Champion Sebastian Laplanne from the Djai Muay Thai club in Toulon, a veteran of 40 fights.

Stachura has had five fights in total and was matched against local fighter Cedric Ferrandon who was in his 14th.  This made the local man clear favourite going into the match, however a serious nose injury after a sustained powerful attack by Stachura saw the first doctor’s intervention. Although the fight resumed it was over shortly afterwards following an accurate left punch.

“This was my first fight under full rules and this win has given me much more confidence.  I feel like I have overcome a massive challenge today” said Stachura after his victory.

Addis versus Laplanne was the main event and the betting was even with no clear favourite. However it was the Toulonnaise who proved to be the fitter man wearing down the Harrogate fighter with consistent combinations.

“It has been really difficult to prepare for this fight and the camp hasn’t been the best.  I have started my own business and got engaged so it’s been pretty hectic” said Addis. He added “I’m disappointed to not have taken the win but am pleased with what I’ve achieved during my career. I can’t thank Pierre enough for his coaching over the years and wouldn’t have got to this level without him!”

Head Coach Pierre Mahon said, “Oskar is getting good quickly. He has all the attributes needed to make it to the highest level as Kris has done. It’s been a pleasure to work with Kris and I wish him all the best in the future.”